Biscuits and Gravy - A Memorial for my brother, Billy 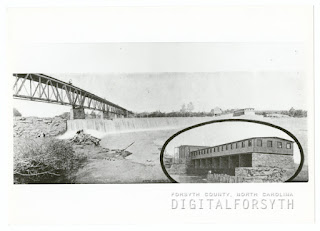 I read this at the memorial service for my late, beloved, big brother Billy. This is a Billy fish tale. But, unlike most fish stories, this one is absolutely true. After nearly 40 years, it’s still one of my favorite memories and a story Billy and I recounted with each other many times over the years. I hope  you enjoy reading it as much as I enjoy remembering it. I call this fish tale,

Momma dropped us off by the railroad tracks where Idol’s Road makes the hard left turn. We pulled our tackle boxes and fishing poles from the back of the giant, wood-paneled station wagon and waved goodbye as she drove away. “Come get us in the morning!” Billy yelled.
I think we were both somewhere between 11 and 14 years old. Those last childhood years when the closeness of brotherhood comes easy.  Before high school, before cars, before serious girlfriends.
How Billy had talked Momma into letting us camp overnight at Idol’s Dam on the Yadkin River, I never knew. Smooth talking was one of his gifts. Like most of our adventures together, I was just along for the ride.
Fishing poles. A cast net. Tackle boxes. Some matches. A good knife.  That’s all we brought. No tent. No sleeping bags. No flashlights. No shoes. And no food.
We’d spend the night catching fish and roasting them on spits over the fire. That was our plan anyway. A couple of country boys camping on the Yadkin, eating like kings!
We made our way along the quarter mile of warm railroad tracks, to the trestle bridge spanning the Yadkin River just above Idol’s Dam. The Summer sun had melted the black tar on the railroad ties of the trestle. It stuck to our bare feet in sticky black spots as we crossed. 40 feet below the muddy waters flowed lazily towards the dam. On other visits, we’d climbed the lower iron girders far below, carving our initials, BL & SL, into the thick black tar that coated most of the trestle. I sometimes wonder if they are still there. Still as vividly carved as my memory of them.
Catching bait fish with the cast net in the rocky whitewater below the dam was a Billy specialty. Standing knee deep in the rapids, Billy would gather up the net in his hands, carefully folding it in on itself. Then with one smooth swinging throw, he’d let the net fly, expanding into a perfect circle, before sinking into the foamy, rushing water. Hauling in the net revealed a dozen or so small, shiny, silver Shad fish. We threw them into a cut milk jug that we had found by the riverbank. Even with water in the jug, they never lasted very long. They lived fast, and died fast.
We’d camp on the tip of the spear-shaped island that sprouted near the hydropower building at the far side of the dam. The river was low, so crossing the dam on foot was easy. Just an inch or two of warm muddy water spilling over the top and splashing the rocks 12 feet below.
The long, skinny island had a viney, tree-covered spine, and narrow, sandy shores. We headed to the point to set up camp. Billy knew the fishing would be better there.
With no tents, making camp was easy. Billy cut bait and set up the rods. I gathered wood from the island and made a fire pit with some river rocks on the sand near the point.
And then, we fished, talking confidently about catching a big striped bass for dinner, as the sun slowly sank behind the tall Sycamore trees upriver.
By 9 o-clock, the sun was gone, and so was most of the light. I started the fire even though it was still warm. We’d need it to cook supper soon. We were sure of it. Still, no fish.
11 o-clock. A million stars dotted the clear night sky. The air by the river was crisp and cold. The fire was burning warmly, but in our shorts and t-shirts, we were freezing. The sand was still warm, so we buried ourselves in it by the fire. Warm sand sleeping bags and soft sand pillows for our heads. Still, no fish.
2 AM. We woke up FREEZING. The fire was just glowing embers. Our now cold sand beds had sucked the warmth out of us. Nothing is more miserable than freezing sand in your underwear. Still, no fish.
2:15AM. Billy and I huddled together for warmth, teeth chattering. We’d rebuilt the fire with the last of our wood. Our fronts were warm. Our backs were frozen. Still, no fish.
3:30AM. The fire nearly gone, and colder than ever, Billy suggested we abandon camp and see if we could break into the hydropower building. It just had to be warmer there. Screw camping!
Tripping and stumbling over rocks and logs in the darkness, we made our way along the island shore toward the pale cold light of the power station. Climbing over the fence into the lower open area of the building, we found all the heavy oak doors locked. It wasn’t any warmer here either. In fact, there was a steady breeze that made the cold night air bite even deeper. In a dark corner we found a few old, sand crusted burlap sacks. We took them and headed back to our dying fire.
Billy dragged a large dead log out of the trees by our campsite. I snapped the branches off to rekindle the fire. Billy heaved the fat part of the log onto the flames. Hopefully, that would get us to dawn.
We each crawled inside a prickly, gritty, itchy burlap sack and inched as close to the fire as we could without setting our sacks alight. And there we lay, for the next 3 hours. Freezing and miserable. Trying to sleep in sandpaper sleeping bags. And still, no fish.


Dawn came, and we were still alive! The morning birds rioted in the trees on the far bank. The river gurgled lazily in the morning sun. I was ready to leave. Billy, wanted to fish. He was never a quitter!
As the morning warmed and the summer cicadas began to sing, the misery of the night was forgotten. Fish for breakfast would be awesome! We used the last of our bait, cast out, and waited. .. And waited.
An hour or so later, out of time, and out of bait, Billy was finally forced to give up. There would be, No Fish.
We packed our gear and made our way back across the dam, and over the trestle along the railroad tracks, toward the road where Momma would pick us up. We laughed together about the camping and complained about the bad fishing. Billy said we’d ask Momma to make us biscuits and gravy when we got home. Who needed fish, anyway?